Visiting Florence? Here's What to Eat, Do & See

Even the name is pretty.

One of the most famous and visually stunning cities in the world, Florence should be on everybody's bucket list to visit at least once in their lifetime.

Between the towering, breathtaking architecture, the winding cobblestone streets, mix of tourist areas and more off-the-beaten-path local hideaways, this bustling city is brimming with places to explore and foods to eat.

So let's not waste any time:

*Note: There are two ways to think about Florence: "The Side of the Duomo"—the domed, Gothic Cathedral of Santa Maria del Fiore—and "The Other Side." The Arno River runs through the center of the city, and its northern bank with the Duomo is considered more touristy, as many other major attractions are also there. 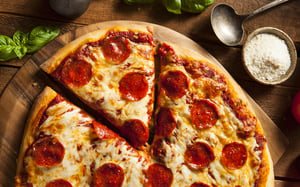 There are two locations in Florence, and both are amazing.

Pear Raviolis (or Anything, Really) at La Giostra

This intimate restaurant is tucked away on a side street near the Duomo. Dimly lit with string lights and an eccentric owner that will stop by your table to chat, and likely pour you some limoncello, the atmosphere is not something to miss.

A meal at Acqua al 2 will forever surely change how you view food. This local treasure is famous for its blueberry steak, which casts a flavorful, magical spell upon your taste buds. It's a good idea to get a reservation, though, as tables fill up pretty quickly.

Lovingly called Pino's Sandwiches after the always-smiling owner, this family-owned sandwich shop makes amazing paninis, with much more variety than the basic salami-and-cheese variety. Locals and visitors alike rave about them.

Run by three brothers from Naples and featuring a wood-fire stone oven, Gustapizza is on "The Other Side," and renowned as the best pizza in Florence. Expect a wait, but also something truly sensational. If you're lucky, you might even get surprised by a heart-shaped personal pie!

Select your destination, and we'll pair you with an InteleTravel Advisor based on your travel needs.

American Breakfast at The Diner

It's common for many travelers to miss a little taste of home. This spot boasts an ambiance and menu that will transport wayward Americans right back to their favorite diner. Whether you're craving blueberry pancakes, fries, or a bacon cheeseburger, you're covered here.

Chocolate Croissant From a Secret Bakery

Throughout the city are late-night snackers' dreams: secret bakeries. Typically in the backs of restaurants, savvy patrons also gather near unmarked back doors that occasionally present a bag of piping hot pastries for a few euros. Enjoy the adventure of tracking the sweet smells down a dark alley, and be sure to stay quiet along your quest.

This open air market, which also has an indoor food section, is famous for its beautiful leathers, silk, and jewelry. Look for the blue oval sign with red letters stating "Official Florence Distributor" to ensure you're purchasing the real deal, though!

Have a coffee at The San Lorenzo Food Market.

Amid the aforementioned leather market is the Mercato Centrale, famous for its food. The two-level marketplace is home to butchers, fishmongers, specialty shops, a bustling food court, coffee bars, and much, much more.

Take in the art at the Uffizi.

The Uffizi Gallery resides on the Duomo side, in the Historic Centre of Florence. It houses some of the most important Renaissance artwork, including works by Leonardo da Vinci, Botticelli, Michelangelo, and Rembrandt.

Explore the countryside on a Vespa.

There's no more authentic way to take in the scenic Tuscan countryside than via Vespa. You can rent these motorized scooters around the city with just a passport, valid driver's license, and credit card.

Take a dip at Le Pavoniere.

This public swimming pool is perfect if you're visiting Florence between June and September and want to cool off. Spend a relaxing day soaking in the sun with locals or showing off your aquatic skills in its crystal clear waters.

View From the Top of the Duomo

The Cathedral of Santa Maria del Fiore, aka the Duomo, is massive, breathtaking, and the most recognizable structure in Florence. Open daily at 8:30 a.m. but closed on Sundays, the climb to its top is steep and narrow, but the payout is worth every one of the 463 steps. *Note: Your shoulders must be covered to enter the Duomo.

Inside the Ponte Vecchio

The main, and oldest bridge in Florence, the interior of the Ponte Vecchio teems with charming jewelry shops, art merchants, and antique boutiques. It's hard to not feel like you've been transported to medieval times here!

Sunset From the Piazzale Michelangelo

Follow signs on "The Other Side" for Piazzale Michelangelo, and climb to its top. Once there, take a seat and marvel as the sun sets between the Ponte Vecchio and the Duomo. Soak in the breathtaking panoramic views of the entire city. (You'll probably also witness a few proposals here, so bring some tissues.)

Marvel at the statue of David—all three of 'em.

Fun fact: There are three "Davids" in Florence, so don’t get fooled! One stands at the entrance of the Palazzo Vecchio, and is a replica of perhaps the most famous sculpture in history, Michelangelo's David, which is housed within the Galleria dell'Accademia di Firenze. There's also a bronze cast of the renowned work at the Piazzale Michelangelo.

Your dream vacation is just a few clicks away.